How Ricochet technology addresses these main points is via what they call a ‘mesh network’, a concept that enables sensors to connect to each other and repeat messages to each other – and – indirectly to the alarm panel.

The idea being that Ricochet sensors essentially link together in a chain to connect back to the central control panel – with the technology identifying the shortest / most efficient route back.

The result of this ‘mesh network’ model is that sensors don’t have to send their signal so far (as they daisy chain together) resulting in greater reliability, greater scalability and greater efficiency.  Wins all round!

The technology is smart in that it works out the shortest route back to the central panel, and will also self-heal.

Ricochet-powered sensors receive and repeat wireless transmission from other sensors.  This means that the size, range and scaleability of systems is extended as wireless signals are no longer limited to point-to-point communications.

The smarts of Ricochet’s technology means that if a connection is lost between two devices, the network will self-heal and automatically re-route communications via different Ricochet-enabled sensors. 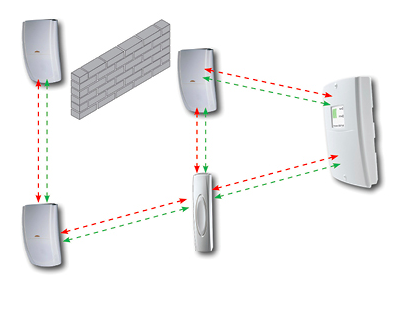 Ricochet enabled devices feature class-leading point-to-point wireless range.  When used as part of a mesh-network, the range is extended as each wireless device acts as a repeater, extending the range for further devices.

All Ricochet wireless communications are protected by sophisticated encryption algorithms.

A Ricochet-enabled wireless device will use 1000 times less energy than an equivalent hard-wired product.

Our review of Texecom Ricochet Technology

We’ve had experience and feedback from 100’s of installations of Texecom’s Ricochet equipment, and the feedback has been overwhelmingly positive.

The fact that Ricochet gets over the point-to-point signal transmission is a big bonus – addressing reliability, scalability and energy efficiency issues.

We give Ricochet Technology an overall rating of 9/10.

How to reset Paxton Net2

How to reset Paxton Net2

How to reset Gardtec (Gtag) alarm after activation

List of all burglar alarm systems / makes / technologies in UK